Affiliate links may have been used in this post. To read our full disclaimer, click here. FREE offers are often time-sensitive. Although they are FREE at the time of posting, please be sure to verify the offer is still free before claiming or purchasing it.
You are here:  Home/FREE Homeschooling Resources/FREE History & Geography Resources for Homeschoolers/Free Resources About the Inventions of Phonographs, MP3s, and More

If you stop to think about it, the recording technological music milestones of our lifetime are nothing short of incredible. Check out these Free Resources About the Inventions of Phonographs, MP3s, and More for a brief history of technology and music. This post is part of the History of Inventions Series

Before technology, we made music in its most basic form. Sounds and rhythms came naturally, I think. I know the Lord saw them as good.

As a matter of fact, the very longest book of the Bible is a book of song – the Book of Psalms. From the poetic Song of Solomon, the song lyrics recorded in the book of Revelation (Chapters 5,7,15), and the accounts in Ephesians 5:19 of the church “making melody to the Lord with their (your) heart,” we can see that sound and music was clearly something God wanted us to know about.

It would be no surprise that humans, made in His likeness, would want to advance in their knowledge and understanding of music, how it’s made, find more ways to hear it, and how to make it even better.

Man’s very first advance in modern technology and music came way back in 1877 through the invention of the phonograph totally by fluke.

1877: Invention of the Phonograph

Thomas Edison noticed accidentally that by running indented tin foil under the telegraph stylus, he heard a speech-like noise.

By the end of that year, he had Marry Had a Little Lamb jamming in the first working phonograph. Thomas Edison officially became the very first inventor to record the human voice.

Although the “graphophone” invention followed, Thomas Edison came back with the improved phonograph using a battery-driven motor – no more crank up.

We have all seen them in the movies, but did you know that jukeboxes were one of the only products that actually survived the economic crisis of the times, although it went from 30 different franchises to literally only one – Columbia Graphophone Company (sound familiar?).

The cylinder methods of recorded music evolved, and disc technology was birthed (1906). Then a radio station in Pittsburg began the very first commercial radio station, which boomed. Image by Prawny from Pixabay

Discs were way too fragile, and so the new vinyl (polyvinyl chloride) option became the choice method of hearing music well into World War II.

1964: Cassettes Get Into the Mainstream

Remember cassettes? ME either – kidding. Although cassettes were created in 1930, they didn’t gain traction until 1964.

The 8-track briefly emerged on the scene with higher quality sound than cassette tapes.

Its convenience and size pushed the vinyl records to the side and created the most explosive surge in the history of recorded audio.

History of the CD | BBC

(FREE PDF) Compact Disks: What, Why and How | ResearchGate

The MP3 was a combination of digital audio and the internet. Mind is blown! It shortly became a phenomenon. It was now possible to transfer music from one device (computer) to another without compromising the quality of sound.

The History of MP3 Technology | ThoughtCo.

Show’s over. Recorded music can now be obtained, transferred, and captured for life via a computer and internet.

Who knows what the next music recording device will be? Who knows how we will listen to music next or how it will look in the future? Until then, learning about these cool inventions is enough to leave us in awe.

Explore these free resources about the inventions of phonographs, mp3s, and more to encourage an appreciation of music history inventions in your home.

FREE Lesson Plan: The History of Audio Formats | Color in my Piano

How do Radios Work? | Concerning Reality

MP3 Questions : How Does an MP3 Player Work? |eHow Tech

The History of Recorded Music | Musical-U.com

Both in the New and Old Testament, music is addressed and strongly supported by those who reverence the Lord. The amount of music mentioned in God’s Word indicates its importance in His kingdom and the need for us to creatively express ourselves through music.

If your child shows a passion for music, ensure you teach them about its origins, its history, the precautions to take with it, and mostly how to use it to glorify His holy Name.

What Does the Bible Say About Music? | Got Questions

Music is clearly a way of expression and communication in the Bible, so I leave you with this verse for kids to learn during your invention-of-recorded-music history lesson:

“Let the word of Christ dwell in you richly, teaching and admonishing one another in all wisdom, singing psalms and hymns and spiritual songs, with thankfulness in your hearts to God.”  – Colossians 3:16 (ESV)

Create an entire inventors unit in your home with the resources below: 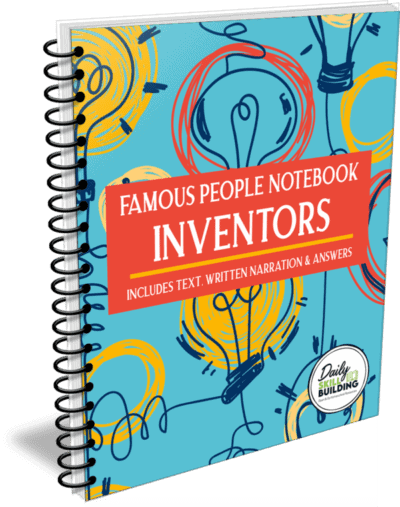 Unit Studies All About Inventors