You are here:  Home/Free Homeschooling Resources/History & Geography Resources for Homeschoolers/Free Resources for Learning About the Underground Railroad
Affiliate links may have been used in this post. FREE offers are often time-sensitive and may be limited time only. I can’t think about the Underground Railroad without visions of the struggles rushing through my mind. One thing is for sure, it is a significant part of our country’s history.

Of course, my kids thought the Underground Railroad was a secret train(s) that rescued slaves from one part of America to the other where they could be free.

Sadly, I failed as a parent. I had to explain to my kids that the Underground Railroad was neither a railroad nor was it underground. SHOCKER!

I really wanted to teach all about these struggles and horribleness in our country’s history. I let my daughter see the movie Hidden Figures, and it prompted many questions about segregation. Then after I taught her about segregation, we had to go all the way back to the origins of how segregation even came to be.

My children learned so much. I saw the compassion and dismay in their eyes as they learned and watched videos about the Underground Railroad.

I have to admit that even I learned so much and needed to dive into the lessons as well. The truth is that in the 1800s a slave was just that. It hurts my soul to think about it.

Slaves were sold, had a life of hard labor (many times excruciatingly hard), sustained brutal inhumane punishments, and many times were torn from their families.

If attempting to escape, the slaves were brutally punished or hunted down, and that is just the tip of the iceberg. Imagine for a moment how difficult, dangerous, and scary it would be to try to escape.

Yet, many slaves still knew that risking their lives in the process was worth it. However, they didn’t just try to make it to the northern states. They had to make it to Canada.

The Fugitive Slave Act of 1793 (with harsher laws added in 1850) allowed for a monetary reward of returned slaves and gave slave owners to right to bring their slaves back with them to the south.

So, slaves had no choice but to try to make it Canada – from the southern states to C A N A D A. Let that sink in.

Although the idea of the Underground Railroad may seem like a knight in shining armor of dark tunnels underground led by a conductor who swiftly led them across America with no problems, this is farthest from the truth.

What was the Underground Railroad, really?

The truth is that because the Underground Railroad was so secretive, the exact origins are just too hard to trace.

It hadn’t actually begun (or had a name put to it) until the 1820s. The beginnings just started with random strangers being kind and allowing the runaway people to hide in their homes or land.

The system was said to have started with someone making the initial arrangement for a slave’s escape. That person would lead the runaway to a “conductor” for the first part of the journey.

While the runaways were in each station of the Underground Railroad, they would be hidden and given food and shelter.

Mostly, the slaves traveled by night, following the North Star and then hiding during the daytime.

Since the stations were unknown to most, many have been lost over the years. However, the National Park Service and the National Underground Railroad Freedom Center in Cincinnati, Ohio, are trying to identify more of the secret locations.

There is just so much to learn about the Underground Railroad that I have to stop here. Your kids will be incredibly intrigued about this part of American history and will better understand the world we live in today.

Explore these free resources for learning about the Underground Railroad:

Teach Your Kids About … the Underground Railroad | The Canadian Homeschooler

Infographic of the Underground Railroad | Maps of World

What Was the Underground Railroad? | Harriet Tubman Historical Society

How the Underground Railroad Worked | How Stuff Works?

Books to check out at the library and book resources about the underground railroad:

(Some books go into more detail than others, so please be sure to review books for age and content appropriateness before sharing with your children.)

Videos to watch about the Underground Railroad:

Virtual tours to explore the ways of the Underground Railroad:

Philadelphia and the Underground Railroad Virtual Tour | The Trip School

Here are some free resources to also teach about Harriet Tubman: 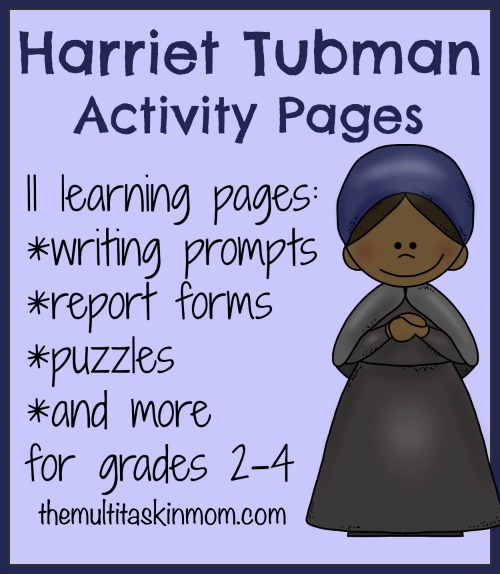 If I could help Harriet Tubman with the Underground Railroad, I would have… (FREE Printable) | WooJr.

So You Think You Know About Harriet Tubman? FREE Flipchart | Patrice Dawkins Jackson

Engage your kids about the truth of the Underground Railroad. Teach them the route, what they went through, who helped them, the secret codes used to communicate, about the key players, but above all — just teach it. Our American history isn’t complete without it.

Will leave you with some quotes from the most famous Underground Railroad conductor of them all, Harriet Tubman. There is much to glean from her faith and encourage:

“I said to the Lord, I’m going to hold steady on to you, and I know you will see me through,” – Harriet Tubman, Scenes in the Life of Harriet Tubman By Sarah Hopkins Bradford

“..and I prayed to God to make me strong and able to fight, and that’s what I’ve always prayed for ever since.” – Tubman to Ednah Dow Cheney, SC, 1865

“God’s time is always near. He set the North Star in the heavens;  *He gave me the strength in my limbs;  He meant I should be free.” – Harriet Tubman to Ednah Dow Cheney, New York City, circa 1859