You are here:  Home/FREE Homeschooling Resources/FREE Reading Resources for Homeschoolers/Free Resources for Studying Tolkien & His Works
Affiliate links may have been used in this post. FREE offers are often time-sensitive and may be limited time only.

Can you imagine having a creative mind like J. R. R. Tolkien? Studying authors will be a great journey with these free resources for studying Tolkien & his works. This post is part of the Classic Authors & Their Works Series

Although Tolkien is best known for The Lord of the Rings trilogy and The Hobbit series, he was also a poet, scholar, philologist, and university professor.

After becoming faculty at the University of Leeds in 1920, he later became a professor at Oxford University. He taught both English language and literature in Oxford.

While in Oxford, he helped develop The Inklings. It was a literary group with members like Owen Barfield and get this… C.S. Lewis. How such great minds could have been in such proximity and at the same time is pretty amazing.

Of course, Tolkien was fascinated by myths and legends and fantasy. He even invented a new language spoken by the elfish characters in his texts.

Tolkien takes his readers through a magical journey of elves, goblins, magical trinkets, talking trees, and all types of fantastically mystical creatures.

Although Tolkien was arguably best known for his The Hobbit series and The Lord of The Rings triology, he actually had an amazing body of work.

>>Be sure to scroll for the free Tolkien printables and resources<<

Sir Gawain & The Green Knight. Ed. J.R.R. Tolkien and E.V. Gordon. The Clarendon Press, Oxford, 1925. A modern translation of the Middle English romance from the stories of King Arthur.

The Hobbit: or There and Back Again. George Allen and Unwin, London, 1937. The bedtime story for his children famously begun on the blank page of an exam script that tells the tale of Bilbo Baggins and the dwarves in their quest to take back the Lonely Mountain from Smaug the dragon.

Farmer Giles of Ham. George Allen and Unwin, London, 1949. A faux-medieval tale of a farmer and his adventures with giants, dragons, and the machinations of courtly life.

The Fellowship of the Ring: being the first part of The Lord of the Rings. George Allen and Unwin, London, 1954. One of the world’s most famous books that continues the tale of the ring Bilbo found in The Hobbit and what comes next for it, him, and his nephew Frodo.

The Two Towers: being the second part of The Lord of the Rings. George Allen and Unwin, London, 1954. The continuation of the story begun in The Fellowship of the Ring as Frodo and his companions continue their various journeys.

The Return of the King: being the third part of The Lord of the Rings. George Allen and Unwin, London, 1955. The conclusion to the story that we began in The Fellowship of the Ring and the perils faced by Frodo et al.

The Adventures of Tom Bombadil and Other Verses from the Red Book. George Allen and Unwin, London, 1962. A collection of sixteen ‘hobbit’ verses and poems taken from ‘The Red Book of Westmarch’.

Tree and Leaf. George Allen and Unwin, London, 1964. Reprints Tolkien’s lecture “On Fairy-Stories” and his short story “Leaf by Niggle”.

Smith of Wootton Major. George Allen and Unwin, London, 1967. A short story of a small English village and its customs, its Smith, and his journeys into Faery.

The Road Goes Ever On: A Song Cycle. Houghton Mifflin, Boston, 1967; George Allen and Unwin, London, 1968. (Second edition in 1978.) A collection of eight songs, 7 from The Lord of the Rings, set to music by Donald Swann.

The Silmarillion. Ed. Christopher Tolkien. George Allen and Unwin, London, 1977. Tolkien’s own mythological tales, collected together by his son and literary executor, of the beginnings of Middle-earth (and the tales of the High Elves and the First Ages) which he worked on and rewrote over more than 50 years.

Unfinished Tales of Numenor and Middle-earth. Ed. Christopher Tolkien. George Allen and Unwin, London, 1980. More tales from Tolkien’s notes and drafts of the First, Second, and Third Ages of Middle-earth giving readers more background on parts of The Lord of the Rings and The Silmarillion.

Letters of J.R.R. Tolkien. Ed. Humphrey Carpenter with Christopher Tolkien. George Allen and Unwin, London, 1981. Tolkien wrote many letters and kept copies or drafts of them, giving readers all sorts of insights into his literary creations.

Finn and Hengest: The Fragment and the Episode. Ed. Alan Bliss. George Allen and Unwin, London, 1982. Tolkien’s translations and commentaries on the Old English texts for lectures he delivered in the 1920s.

The Monsters and the Critics and Other Essays. Ed. Christopher Tolkien. George Allen and Unwin, London, 1983. A collection of seven lectures or essays by Tolkien covering Beowulf, Gawain, and ‘On Fairy Stories’.

The Book of Lost Tales, Part I. Ed. Christopher Tolkien. The History of Middle-earth: Vol. 1. George Allen and Unwin, London, 1983.

The War of the Ring. Ed. Christopher Tolkien. The History of Middle-earth: Vol. 8. Unwin Hyman, London, 1990.

The War of the Jewels. Ed. Christopher Tolkien. The History of Middle-earth: Vol. 11. HarperCollins, London, 1994.

Roverandom. Ed. Christina Scull and Wayne Hammond. HarperCollins, London, 1998. In the 1920s a toy dog was lost on a seaside holiday, to cheer his son up Tolkien created a story of the dog’s adventures.

Tales from the Perilous Realm. HarperCollins, London, 1997. (Contains: Farmer Giles of Ham, The Adventures of Tom Bombadil, “Leaf by Niggle” and Smith of Wootton Major.)

The Legend of Sigurd and Gudrún. Ed. Christopher Tolkien. HarperCollins, London 2009. Tolkien’s own versions of the story of Sigurd and his wife Gudrún, one of the great legends of northern antiquity.

The Fall of Arthur. Ed. Christopher Tolkien. HarperCollins, London 2013. A collation of Tolkien’s versions of the tale of the end of the Arthurian cycle wherein Arthur’s realm is destroyed by Mordred’s treachery, featuring commentaries and essays by Christopher Tolkien.

Yes, his most famous works remain The Lord of the Rings and The Hobbit.

I was never really into fantasy, yet one Saturday my husband forced me and the kids to do a Hobbit marathon. I must say I didn’t hate it, it was actually quite brilliant. My husband read all of the books and wanted us all to experience it together. It was a good family time bonding over hobbits and goblins. My daughter, 14-years-old, even visited Hobbiton in New Zealand while on vacation with our family members in December!

The website called The Tolkien Society is an educational charity, literary society, and international fan club that is devoted to promoting the life and works of J.R.R. Tolkien.

His works were inspired by ancient European mythologies with its own maps, lore, and languages. Your kids will enjoy learning and reading all about them.

Grab these free resources for studying Tolkien & his works: These materials about Tolkien’s works will go great alongside your lessons:

FREE The Hobbit – Cursive Copywork | In All You Do The Hobbit Lesson Plan Introduction to The Hobbit | GradeSaver

Download FREE Copywork for The Hobbit | Walking By The Way

Explore these interactive resources and activities to help study Tolkien and his works:

The Hobbit & The Lord of the Rings FREE Audiobooks | Audiobooks.com

Here are some free resources for studying Tolkien & his works for homeschoolers on a budget.

Fellowship of the Ring Movie Study | Year Round Homeschooling 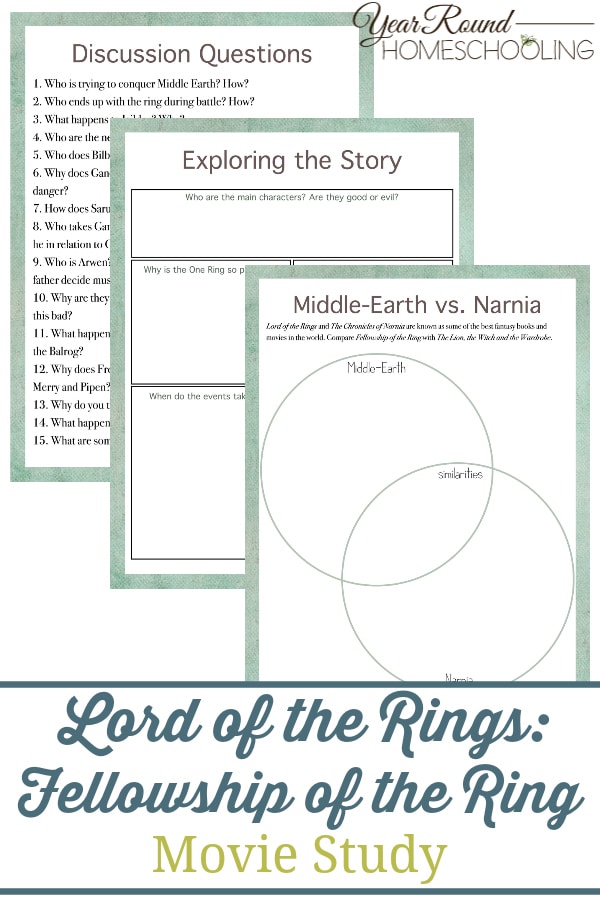 The Fellowship of the Ring Unit Study | Learn4YourLife

Fellowship of the Ring Book Study | Year Round Homeschooling

Tolkien’s works are still thriving today. They have a huge following with The Tolkien Society showing us just a glimpse of what his literature meant/means to the rest of the world.

These free resources for studying Tolkien & his works will help you learn all about this brilliant writer in your homeschool.