You are here:  Home/Free Homeschooling Resources/History & Geography Resources for Homeschoolers/Resources to Teach Kids About Native Americans
Affiliate links may have been used in this post. FREE offers are often time-sensitive and may be limited time only. I feel as if the only people who can tell the story of the Native Americans are the natives themselves. Just the mere fact that as a kid growing up, they were called Indians is now wrong to me.

Native Americans didn’t coin the label “Indian” themselves. When Christopher Columbus was traveling westward, he was in search of India. So he called the Native Americans, Indian.

That alone is cringey to think about it, yet I am also unsure if it’s even offensive to some Natives since their lands are referred to as Indian Reservations. My sincere hope is not to be offensive but to encourage the studies of Native American history in our homes.

Therefore, I won’t pretend I am an expert in this area – at all. What we can do is teach our children about how Europeans got here. We can tell our kids the truth, and we teach them about the Native Americans who still hold some of their traditions and culture even to this day.

Who are the Native Americans?

That is such a stacked question. It holds a range of answers since the Native Americans had hundreds of cultures stretching from the Yukon Peninsula to the Gulf of Mexico.

Traditions and cultural practices differed based on the region in which the Natives were located.

The indigenous people of the Americas were primarily hunters and gatherers, eventually practicing agriculture and aquaculture. They were very advanced, building monuments and forming communities.

Here is the sad truth. Europeans arrived, and Native Americans were able to coexist with them. Unfortunately, a majority faced trouble and diseases carried by the Europeans like cholera, measles, smallpox, and pneumonia.

Whether it be by force or to flee from these deadly diseases, natives moved to areas unwanted by the Europeans.

The natives didn’t use written records of their happenings. They carried on their history from stories that have been passed down from generation to generation.

There are over five hundred distinguished tribes in North and South America. The people are very spiritual, believing in many gods, performing rituals and customs, and put great emphasis on the relationship between man and nature.

You may have heard about percentage rates when it comes to the lineage of Native Americans. To be considered Native American, one would need to show 25 Percent / One-Fourth Blood Quantum (One Grandparent).

The person would either need a CDIB card or be enrolled in a tribe. A Certificate of Degree of Indian Blood (CDIB) is issued by the Bureau of Indian Affairs (BIA), an agency under the United States Department of Interior. This certificate (CDIB) is the basis most tribes use to enroll tribe members.

In public school, I remember thinking that maybe Native American tribes no longer exist. The teachings were so brief that one would think Native Americans, were a part of history only. I associated them with their garb, Thanksgiving, and teepees.

It is important for us to teach our children that native Americans do not fit into the box that the textbooks of old put them in. Native American cultures are alive, thriving, and beautiful.

It is important to note that 87 percent of state history standards don’t even mention Native Americans the way they should. As homeschooling families, we don’t have to adhere to these misrepresentations.

We can remember, and teach our children, that Native Americans were at the very beginning of our America and continue to be a part of what our country is today.

Grab these resources to teach kids about Native Americans:

FREE Native American Tribes of the US by Region Cheat Sheets 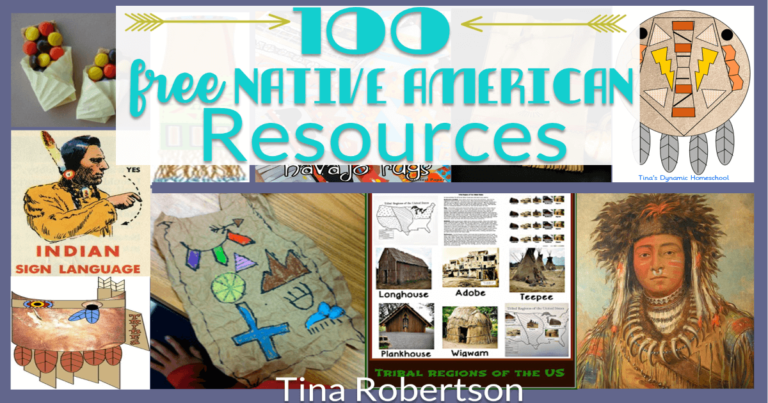 These activities will help you make your Native American lessons, fun, and interactive:

If you have crafty kids at home, these crafts for studying Native Americans will be a hit:

Videos for kids on Native Americans are great tools to use alongside your lessons. Check some videos out here:

Real Life As A Young and Native American | i-D

History of Native Americans for Kids – Timelines – Animation | Past to Future

Powwows.com is a great site to visit and explore Native American Culture and Pow Wow information. It would be amazing to visit a pow wow during your lessons on Native Americans. This site can guide you to Pow Wow events near you.