You are here:  Home/Free Homeschooling Resources/History & Geography Resources for Homeschoolers/FREE Resources for Learning About the Colony of Jamestown
Affiliate links may have been used in this post. FREE offers are often time-sensitive and may be limited time only.

Jamestown was the first permanent English settlement that was founded in North America. If you are studying American History in your homeschool, your kids will enjoy learning about the first colony that survived of the 13 colonies in America. There are lots of free resources for learning about Colonial Jamestown to create an awesome unit study for your family. Jamestown was established on May 14, 1607. Many early settlements were founded for religious reasons, but Jamestown was founded for money. It was founded by a group of 100 settlers all men, who were called the Virginia Company. Their venture was funded by the King of England to further develop land in the New World with the search for securing gold. These men would receive land as payment for their hard work.

It was a rough start. The colony barely made it the first year, if it hadn’t been for the help and trading with the Indians. They were the first colony to make it and survive, after Roanoke, the Lost Colony. They also had help in a very strong leader, Captain John Smith. He was the leader of Jamestown and played a huge part in exploring the rivers in the Chesapeake Bay.

John Smith was the first explorer to record and map the entire area. The Indians captured him while he was exploring and foraging for food. If your kids are familiar with the story of Pocahontas they will know that she was the daughter of the Indian Chief who threw herself across his body so he was not killed.

Read about the First Residents of Jamestown from the National Park Service.

Learn more about Colonial Jamestown and take a quiz after you are done reading at Ducksters.

Clarendon Learning has a free online lesson plan that explains the significance of this settlement in relation to the 13 colonies. It also discusses how the settlers interacted with local native populations.

Read about the true account of the settlement of Jamestown from John Smith about how Pocahontas rescued him at The Real Pocahontas.

Learn more about Captain John Smith with these printables from Student Handouts.

Read more about the biography of John Smith with printables and activities on the settlement of Jamestown from Mr. Nussbaum.

Jamestown Settlement for Kids Unit Study and Hands-on Activities from 123 Homeschool 4 Me. These hands-on activities will make history come alive for your children and create many fun memories. 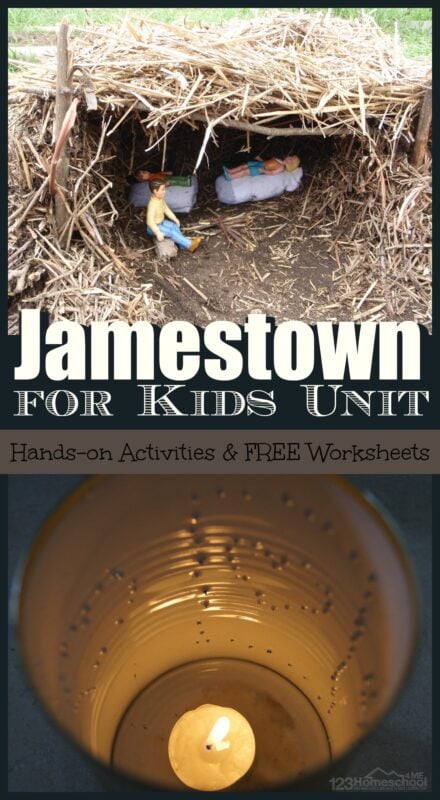 Websites to learn more about Jamestown:

The Jamestown Settlement and American Revolution Museum at Yorktown has some really amazing lectures that are open to the public. They are now available as virtual lectures. All you need to do is sign up online and anyone can attend. Find out more about them at the 2020 Lecture Series HERE.

Jamestown Rediscovery in Historic Jamestown has clickable maps to discover, as well as an entire section devoted to educators. The education section has Jamestown from home, printable lesson plans and an online children’s activities center and resources.

Virtual Jamestown is an interactive website that shows John Smith’s voyages of exploration, with maps of the Chesapeake area. There are also virtual panoramas, patterns of settlement and historical documents.

You can view photos and panoramas of the settlement of Jamestown at Nature Berkley.

If you are learning about the 13 colonies and want to learn more about colonial America you will enjoy this resource:

Living in Colonial Times – A Notebooking Journey will take your children on a notebooking adventure through the Colonial times in Early America. They will learn facts about the time period, and what life was like for children during that time.