Affiliate links may have been used in this post. To read our full disclaimer, click here. FREE offers are often time-sensitive. Although they are FREE at the time of posting, please be sure to verify the offer is still free before claiming or purchasing it.
You are here:  Home/FREE Homeschooling Resources/FREE History & Geography Resources for Homeschoolers/Free Resources for Learning About the U.S. Supreme Court

Should your kids care about the inner workings of the Supreme Court? All answers point to YES. Explore these free resources for learning about the U.S. Supreme Court to help your homeschool learn more about the Judicial Branch of the government.

I, honestly, needed to know more about the government myself. That is why I knew I needed to teach my students so we all can learn.

I remember learning about it briefly in school. However, I don’t remember the details of the judicial branch.

I wanted to share what we studied in the Judicial Branch Lesson of the Government Unit.

What is the U.S. Supreme Court?

The Judicial Branch of government is the Supreme Court, the highest court in the United States. Then there are 13 Courts of Appeals, and at the lowest level are 94 U.S. District Courts that cover different regions of the country and hold most federal cases.

The role of the courts is to interpret the laws of Congress. Their role is NOT to make the laws but to uphold them, to make decisions on actual cases where proof says someone has been harmed.

The very most important power the Supreme Court has, in my opinion, (just an opinion) is ensuring that each branch of government recognizes the limits of its own power. This is called the power of judicial review. Checks and balances are important in our government.

They have other important roles as well. It is the very last resort for those that feel they need the ultimate form of justice.

The Supreme Court plays a crucial role in civil rights and liberties by striking down laws that could potentially violate the Constitution.

And finally, according to USCourts.gov, the Supreme Court “sets appropriate limits on democratic government by ensuring that popular majorities cannot pass laws that harm and/or take undue advantage of unpopular minorities. In essence, it serves to ensure that the changing views of a majority do not undermine the fundamental values common to all Americans, i.e., freedom of speech, freedom of religion, and due process of law.”

This government unit is targeted for grades 5 and up, but is flexible for use in your homeschool. 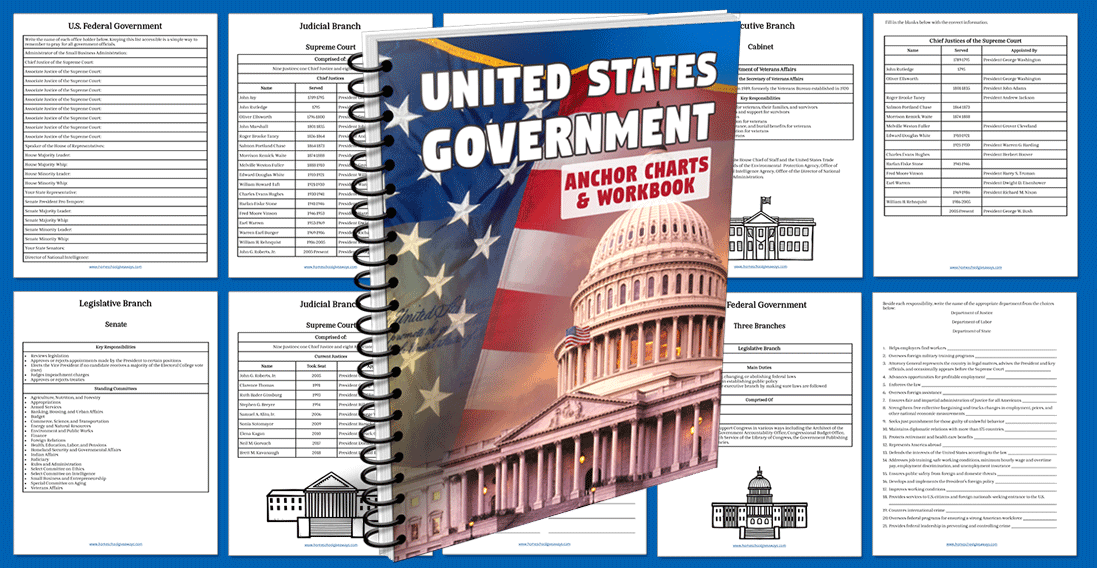 What do Supreme Court Justices do?

Although the Constitution doesn’t specify how many Supreme Court Justices there should be, there were anywhere from 6 justices in the past to 9 justices. There have been 9 justices since 1869 until today.

The main idea behind this lifetime appointment is that they make decisions based on their conscience and are not swayed by outside forces or their needs to be re-elected/elected.

The federal judges of the Supreme Court are appointed for LIFE. So literally, the only way they can be removed is if they die or if they are impeached by Congress.

The judges, also called justices, are nominated by the President of the United States and appointed by the Senate.

Today, there is one Chief Justice and eight Associate Justices of the United States Supreme Court.

Grab these free resources for learning about the U.S. Supreme Court:

The US Supreme Court FREE Resources For Kids and Teachers | MrDonn.com

The Nation’s Court | TIME for Kids

Supreme Court of the United States facts for kids | Kids.Kiddle

The Supreme Court of the United States | We the People

How Do US Supreme Court Justices Get Appointed? | The Kids Should See This

Try some of these projects and activities to liven up your lessons on the U.S. Supreme Court.

Your kids will enjoy these that go alongside your lessons on the Supreme Court:

How to Draw United States Supreme Court | Art for All

How Do US Supreme Court Justices Get Appointed? – Peter Paccone | Ted-Ed

What is the Supreme Court? | Information Station

Don’t miss our US Government Workbook from Daily Skill Building and the free resources below:

FREE Resources for the Studying the Branches of Government

FREE Resources to Learn About the US Government

Learning about the government and its inner workings is an empowering lesson for kids. They can take these lessons and carry them for the rest of their days.

A light has shone on the Supreme Court in the last few years, between the passing of Justice Ruth Bader Ginsburg and the swearing-in of the new Justice Amy Coney Barrett.

This was a historical moment that captured the entire country’s attention, as it should. Our constitutional system is sadly something many Americans aren’t interested in, when in fact, it is extremely important to our country.

Your children will surely benefit from these free resources for learning about the U.S. Supreme Court in your homeschool.