You are here:  Home/Free Homeschooling Resources/History & Geography Resources for Homeschoolers/Resources for Learning About Switzerland
Affiliate links may have been used in this post. FREE offers are often time-sensitive and may be limited time only.

Switzerland has been at the forefront of many talks in the media for some time now. If you are teaching your kids about different countries this year, then these Resources for Learning About Switzerland will help you teach about the Swiss. There a few things that I think about when thinking of Switzerland.

Firstly, I hear it’s like a utopia. All pictures I have ever seen of it just make it look like a glorious place where people live harmoniously together.

Then, I think of Nestle’s Swiss Miss Hot Chocolate – with marshmallows, of course. It probably isn’t even from Switzerland but it still brings many kids a lot of joy associated with the country.

Then there is, “I am Switzerland.” This means that we are neutral in a situation. Many of us have no idea why we say that besides that we know to say it when we aren’t taking sides.

But did you know that the saying is used because Switzerland’s constitution says that the country cannot send out troops to fight foreign wars?

The country has remained neutral in ALL wars since World War I. Image by TeeFarm from Pixabay

There are some other facts that you may find interesting:

I can go on and on because Switzerland is a pretty interesting country like being the most expensive places to live in, they have one of the highest quality of life according to the Social Progress Report from WeForum.org.

Explore these resources for learning about Switzerland in your homeschool: 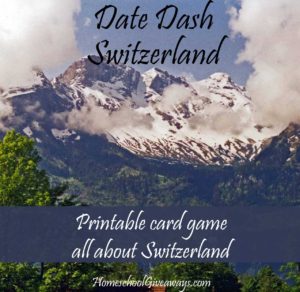 Adventures in Switzerland: Case Of Adventure Review | This Chaotic Bliss Geography MEGA Activity Pack – Explore Every Country in the World FREE Countries and Capitals of the World Cheat Sheets For being such a small country (41,285 km² – about twice the size of New Jersey), Switzerland has a lot of cool stuff going on and to learn about. Between Swiss watch, the Swiss Alps, and Swiss chocolate your kids are sure to want to learn more.