You are here:  Home/Free Homeschooling Resources/History & Geography Resources for Homeschoolers/Resources for Learning About Indonesia
Affiliate links may have been used in this post. FREE offers are often time-sensitive and may be limited time only.

I didn’t know a lot about Indonesia before meeting an Indonesian girl from Australia. Explore these resources for learning about Indonesia in your next country unit study. Indonesia is an interesting country to learn about with your kiddos. I once thought Indonesia was in India. Don’t judge me. Like many others, geography is not my strong suit. The United States ranks very low in regards to geography knowledge in students.

Most young Americans have a weak grasp on any global concepts. A survey report released by the Council on Foreign Relations and the National Geographic Society stated that more than two-thirds of the survey respondents couldn’t identify Indonesia as a majority-Muslim nation.

By the way, Indonesia has the largest Muslim population in the world!

Let’s get it together, America.

I am witness to people around the world knowing that Americans aren’t good at geography. My friends who are Australian tease me all the time about this.

I get it. America has been a superpower for eons, we have plenty of other surrounding states to travel to, and we are self-sufficient. That makes it easy for us to look within ourselves and not worry too much about other nations.

However, learning about the world around us is really important. Many of our kids, whether we like to admit it or not, will leave the nest and travel abroad.

Globalization is also not just a far-reaching myth. It is actually on the minds of many worldwide authorities and organizations. We should teach our kids about what is going on in the world around us and what is going on where.

Rant over. Back to Indonesia.

Indonesia is quite a fascinating country to learn about. Here are a few reasons why:

-Indonesia is the fourth-most densely populated nation in the world after China, the United States, and India. It has 264 MILLION people.

-Jakarta is the capital and largest city in Indonesia, which is on the island of Java. The island of Java houses 60% of Indonesia’s population (130 million people), making it the world’s most populous island. Here is the kicker… It is only the size of New York City.

-Indonesia is the largest archipelago (an area of sea in which there are many small islands) in the world. It has five major islands and thousands of smaller ones between the Pacific and the Indian Ocean.

-There are over 400 volcanoes in Indonesia, and 100 of them are active. The country is part of the Pacific Rim “Ring of Fire.”

Why is there a ring of natural disasters around the Pacific? | Vox

Facts About the Ring of Fire | National Geographic

The Ring of Fire | NatGeo Kids

-Indonesia has a VERY large flower called the Rafflesia Arnoldi. Some say it is the world’s largest flower. The flower looks a little gross to me, but worse yet – it is known for smelling like decaying flesh and is also known as the corpse flower or corpse lily.

There are many other facts your kids will find intriguing, but here is the coolest one by far.

-Indonesia is home to the largest lizard in the world – the Komodo Dragon. It only lives in five of the islands Padar, Rinca, Gili Motang, Flores, and Komodo. They weigh up to 150 lbs and have toxic bites. Yes, they hunt humans as well. Maybe keep this little fact from your kiddos.

Grab these resources to help you with learning about Indonesia in your homeschool: 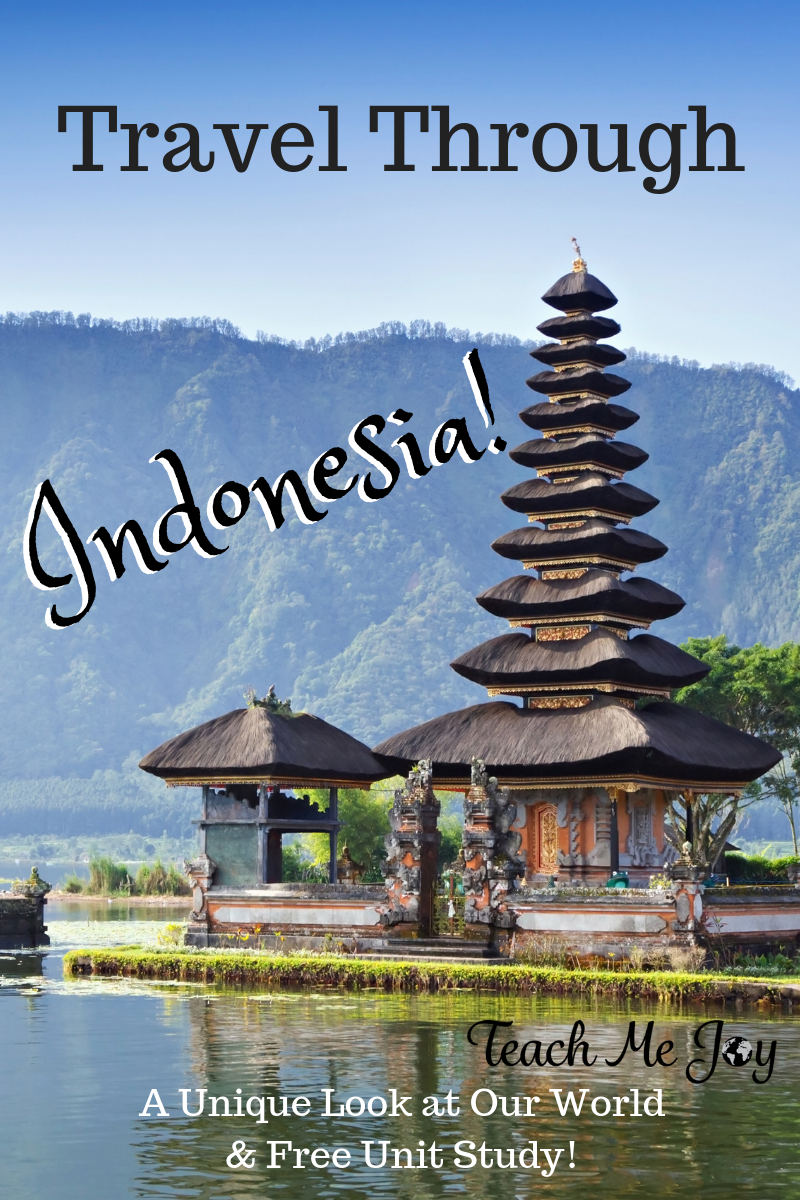 The items below will help you develop mini-lessons to teach basic Indonesian to your kids. My body – body parts in Indonesian | Learning with Valerie and Anne

Make your geography lessons fun and engaging with these activities and crafts:

Don’t let geography disappear from your homeschool plan. Geography creates awareness of location in regards to the rest of the entire world. It also makes sense of the historical and current events happening around the world.

Begin or add Indonesia to your country studies; these resources for learning about Indonesia are great places to start.